We recently finished potty training Thing 1, and let me tell you — it was a bumpy road.  My original goal was to have him potty trained before the arrival of Thing 2 so as to avoid buying twice the diapers.  Yeah…that didn’t happen.  Apparently, Thing 1’s bottom has very refined taste and was not pleased by the freebie Diego potty adapter I’d presented him with.

Determined to ease the financial burden of diapers for two and entirely fed up with the unsavory task of changing a three year old’s “grown up” poop, I embarked upon a quest to find the perfect potty that would magically entice Thing 1 to poop in the toilet instead of his pants.  Read on for details of our potty training journey!

Our first attempt was the Jahgoo Potty.  It was $10, a fun and jazzy lime green color, and fairly modern in appearance.  Plus, it was unobtrusive and compact enough to fit in our closet of a bathroom.

The royal bottom was not pleased, and, Mommy’s decor preferences aside, I can’t say that I really blame him.  While the product description on Amazon says it is “very compact and portable” and “ideal for travelling”, I was surprised by exactly how small this toilet was.  Perhaps I have an abnormally large child, but this was barely big enough for Thing 1 to sit on, and you can forget about getting everything tucked in for containment.

Verdict:  Visually appealing, but too small (though, perhaps if your child is petite, not a boy and/or is potty training young, this could work for you).

Next, after deciding to forget about the visual appeal of the potty (from a parental perspective, anyway) and go for size, I purchased the Fisher-Price Precious Planet Froggy Potty.  Thing 1 giggled at the prospect of peeing in the funny froggy potty.  Amusement was certainly progress, so I felt triumphant…until I realized that it was too bulky to really fit well in our bathroom (seriously, when I said “closet of a bathroom”, it wasn’t hyperbole).  Since it had worked with my niece, and I REALLY wanted this kid potty trained, I gave in and just put the potty in the living room during the day.  Space was not an issue, and he could easily and quickly get to the potty. Aside from its bulkiness, this was a great little potty.  Having to dump it and clean it after every use was a little tiresome, but it was worth it to get him to potty.  Thing 1 then decided, however, that he wanted to be able to use the “big potty”, which, really, was the ultimate goal anyway.  So, back to the store I went.

Verdict:  A bit bulky, and definitely not unobtrusive in design, but large enough and the splash guard worked reasonably well.  Also not horribly expensive (around $11 on Amazon) and, for the type of potty, not terrible to clean.

My final purchase was the Prince Lionheart weePOD Basix.  I saw it on the shelf at our local Target, and it was visually appealing to me while also satisfying the new requirement that it allow for use of the “big potty”.  At about $13, it was certainly not a bank breaker.

Verdict:  I bought a second one for the upstairs bathroom, and Thing 1 is now fully potty trained (with a few minor accidents here and there) and goes by himself.  I would recommend this potty seat without hesitation and with complete confidence that it will work well for most kids.

At this point, I feel that I should also briefly touch on the Safety First 1-2-3 Potty Trainer and Step Stool.  While we didn’t purchase it ourselves, this is the potty at Grammy’s house, so we have quite a bit of experience with it. 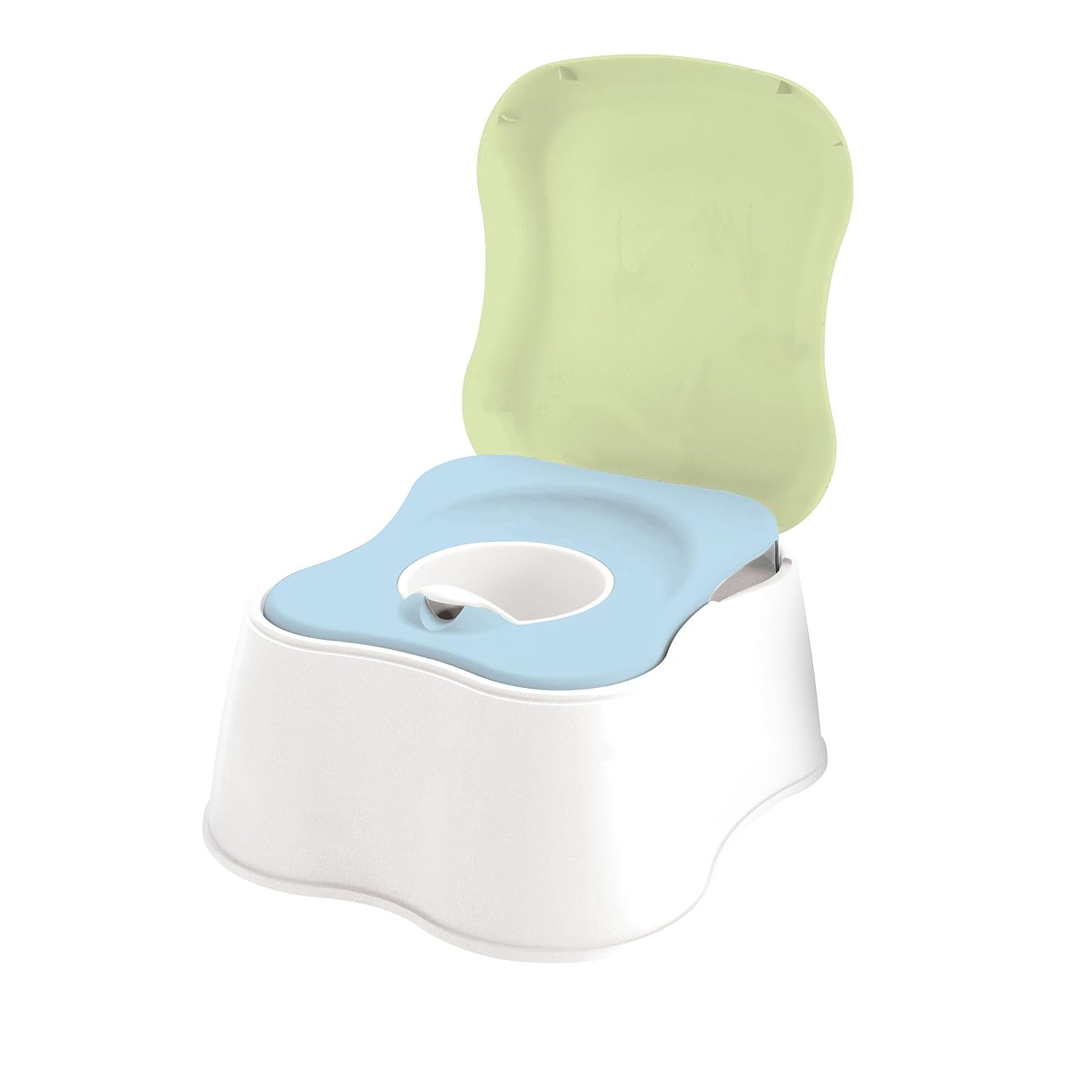 I love the concept of an all in one potty.  Little ones can potty, then close the lid and stand on it to wash their hands.  Excellent!  Although this potty worked well for Thing 1’s older female cousin, it’s not so great for a boy.  The chamber is completely round and rather small, so Thing 1 has a hard time keeping things contained when he sits down.  There really is no way.  It’s just too small.  Again, perhaps my child is larger than average, but I think this potty could use some tweaking to make it more appealing all-around.

Verdict:  Would work fine for a girl, and I love the all-in-one concept, but just doesn’t work as well for a boy as I would like to see.