When Thing 2 began to get horrible eczema patches along the diaper line of her sensitive formulation disposable diapers, we knew it was time to finally take the leap to cloth.  The biggest question was, what brand should we choose?  If you’ve ever looked into cloth diapers you know that, between commercial brands and WAHM diapers, there are about 3.7 million options, gave or take a million.  For us, the answer was, apparently, simple:  My husband chose Rock-A-Bums because, “They have one that looks like a storm trooper!”…Turns out, his logic was sound.  Read on to find out why, see the BRAND NEW PATTERNS, and enter to win your very own rockin’ stash.

Ok, I’ll be completely honest:  the “storm trooper” diaper was just what drew my husband in.  What sold him was the fact that, because they had just released their 2.0, Rock-a-Bums was selling their 1.0 diapers for 50% off.  Those two facts somehow made all the columns in the spreadsheet my engineer husband had made add up just right.

Before we move too much farther, a bit about Rock-a-Bums.  The Rock-a-Bums diaper is a 5-in-1 diaper, meaning it can be used as an AIO, AI2, Pocket, Hybrid or Shell.  In the beginning, I thought this versatility actually wasn’t a huge deal because I knew I wanted to use it as an AI2 and had no use for the other options.  Oh how wrong I was!  In the 4.5 months we’ve been cloth diapering, I’ve used our Rock-a-Bums as AIO, Shell, and AI2, and it’s great that I can get so much mileage out of a single diaper!  Read more about the Rock-a-Bums brand here.

The first thing I noticed when I opened our 1.0s was how incredibly soft the fabric was.  I’m talking inner, outer…all of it.  Since one of the main reasons we were starting down the cloth track was because of Thing 2’s incredibly sensitive skin, the quality and softness of fabric was a huge factor.  I was a little intimidated by the snaps, because I was convinced that I would like velcro much better, but really, once you figure out what settings work for your little one, snaps aren’t bad.  I even kind of grew to like the hip snap, because I felt that I could get the diaper to fit just right around the legs as well as the waist.

Once we used the 1.0s for a while and decided that Rock-a-Bums were worth the investment, we ordered some of the new, improved 2.0 diapers.  Because I was convinced that velcro was going to make my world a better place, I went with velcro on the new diapers.  Surprise!  The velcro was the one thing I DIDN’T like.  I’m sure it works great for some, but I found it to be too strong–it took two hands to open it up, and I then had no hands to hold down the squirming child who didn’t want to be still and have her diaper changed.  I quickly ordered the 2.0 in snaps.  While I still love my 1.0s, the 2.0 has some great advantages:

Overall, I’m truly satisfied with Rock-a-Bums.  They pack a great bang for the buck, have a unique style, and the company’s customer service is amazing.  The one area that I found Rock-a-Bums to be a bit lacking was design options.  Up until today, you could choose Black, Red, or White.  No prints.  I found myself longing for a bit of variety.  Well, guess what?  Today, Rock-a-Bums has delivered! 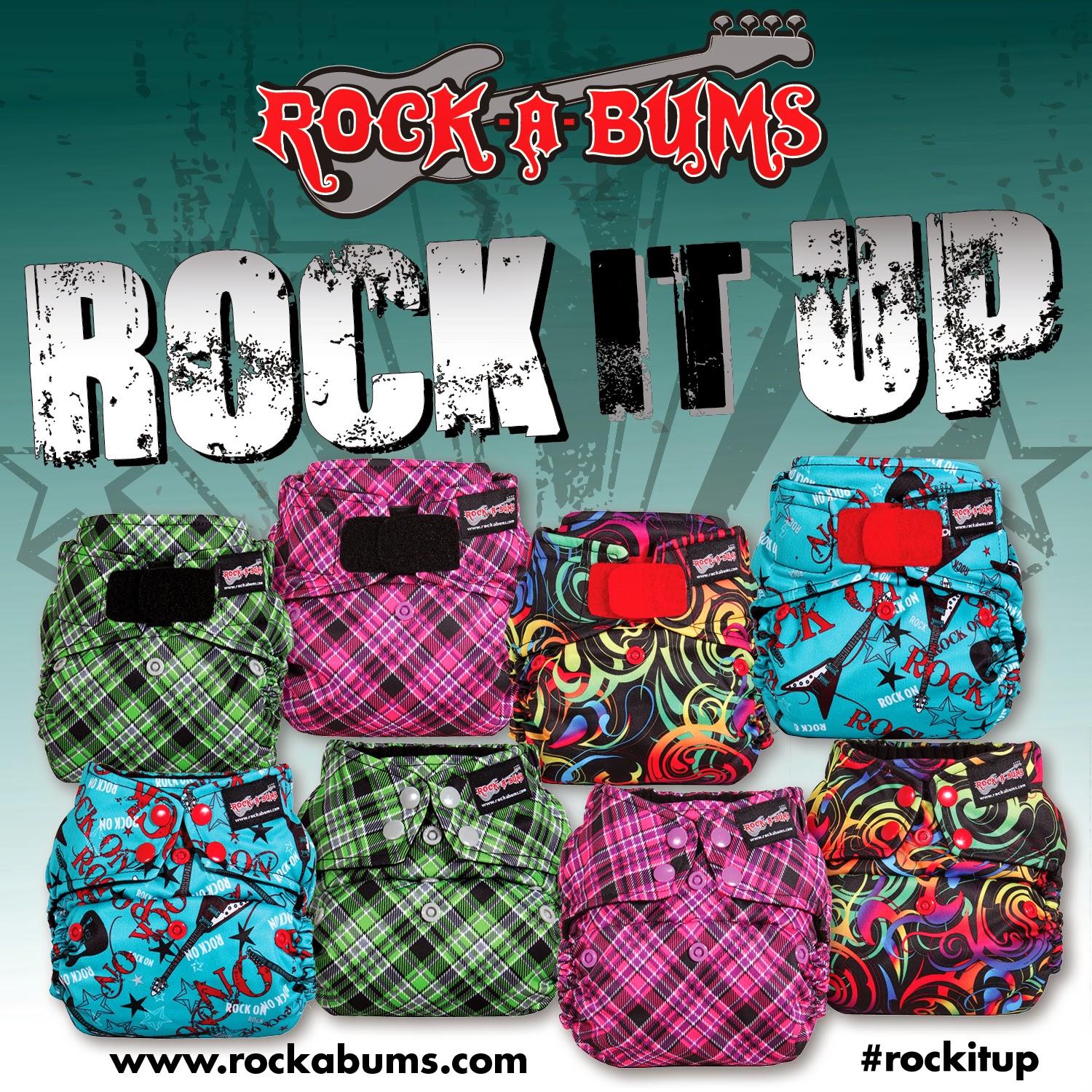 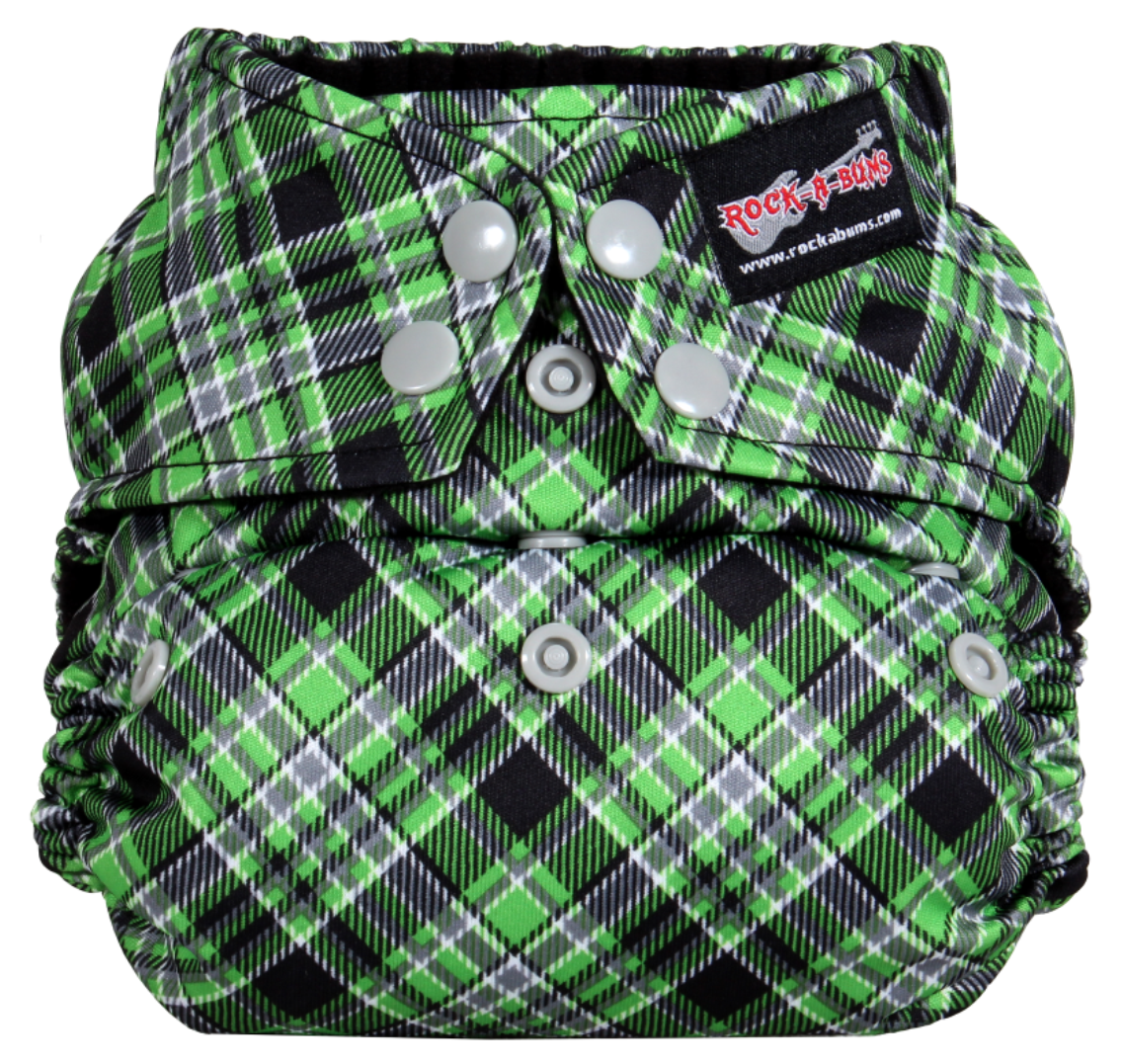 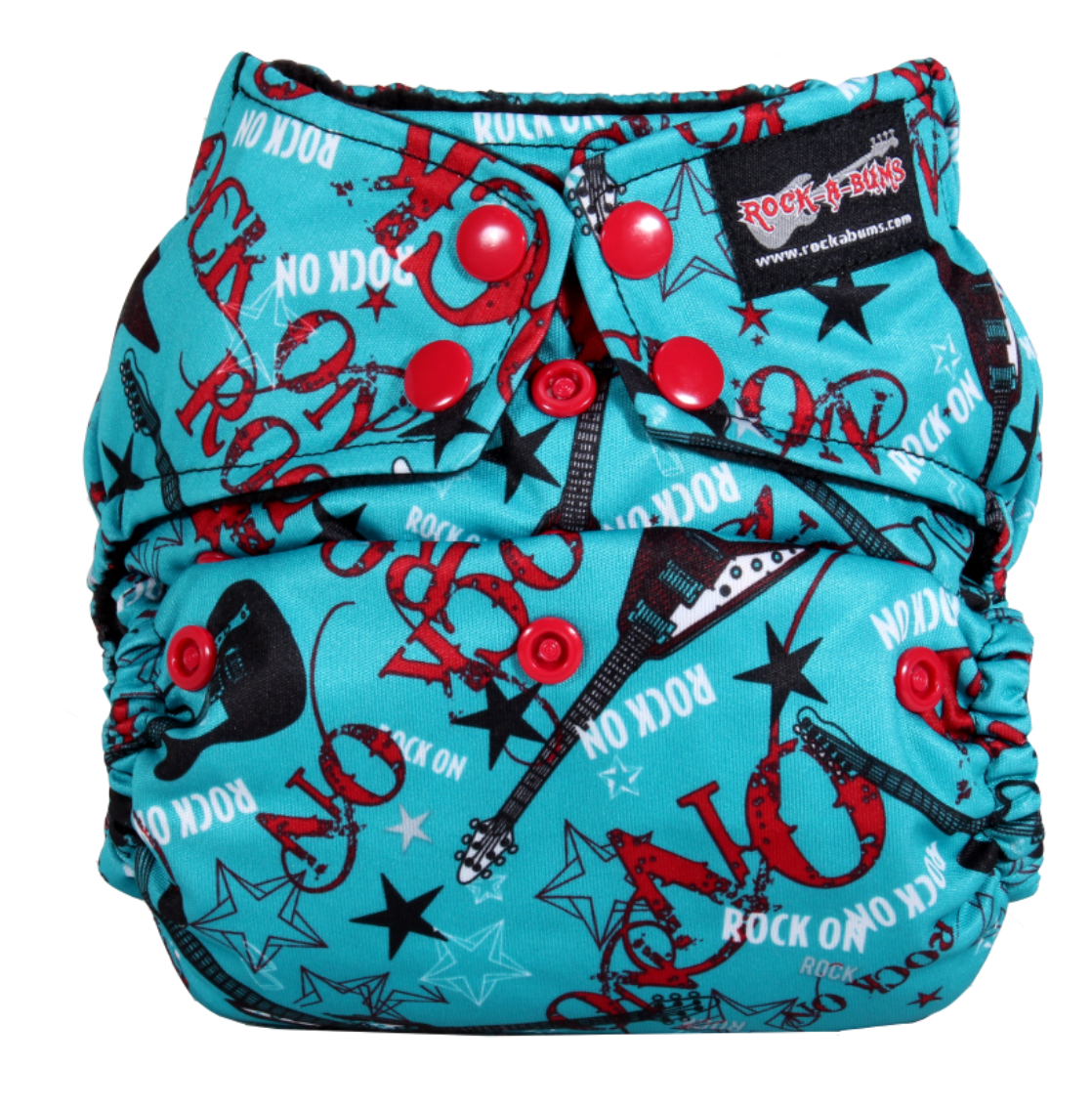 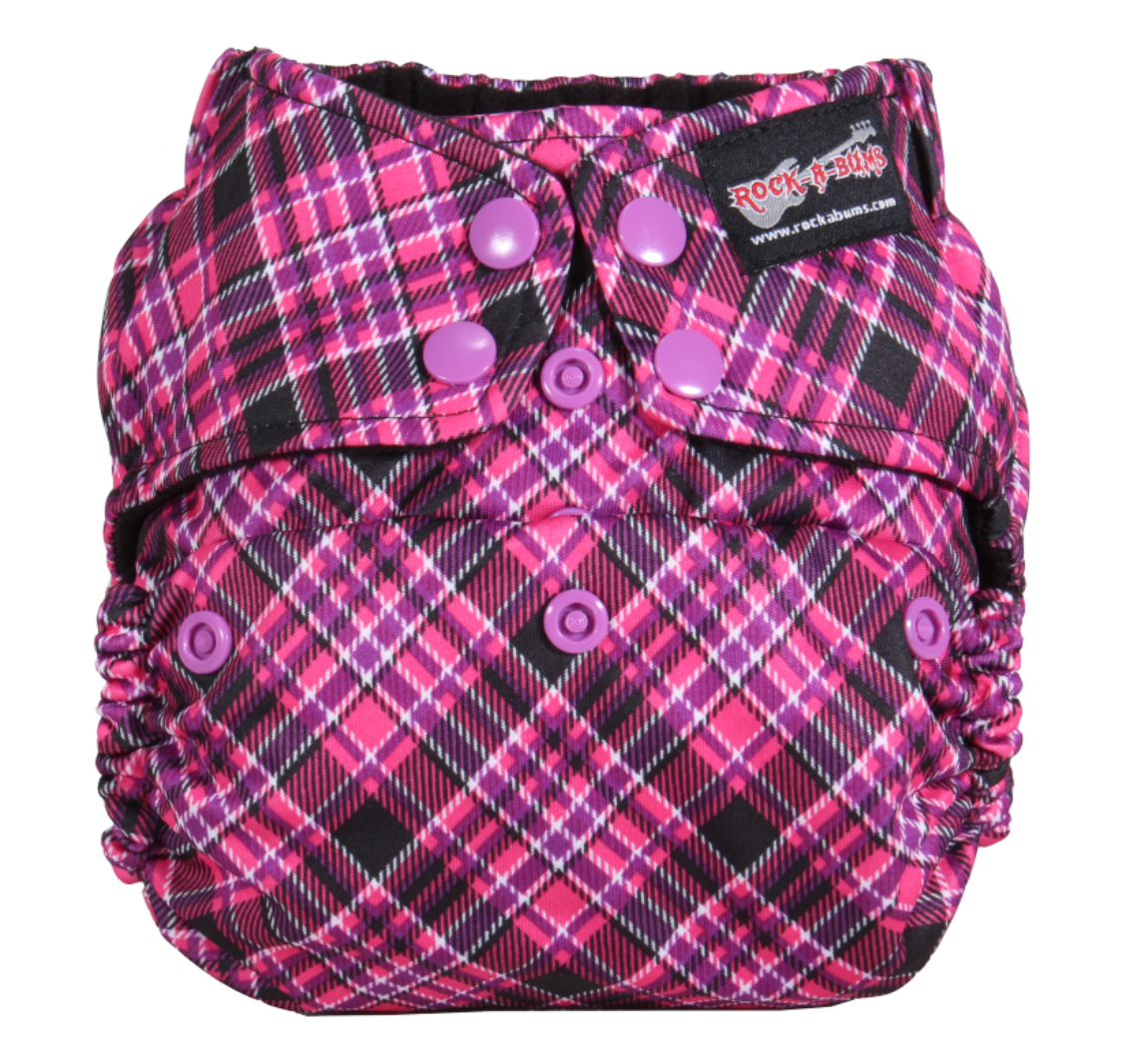 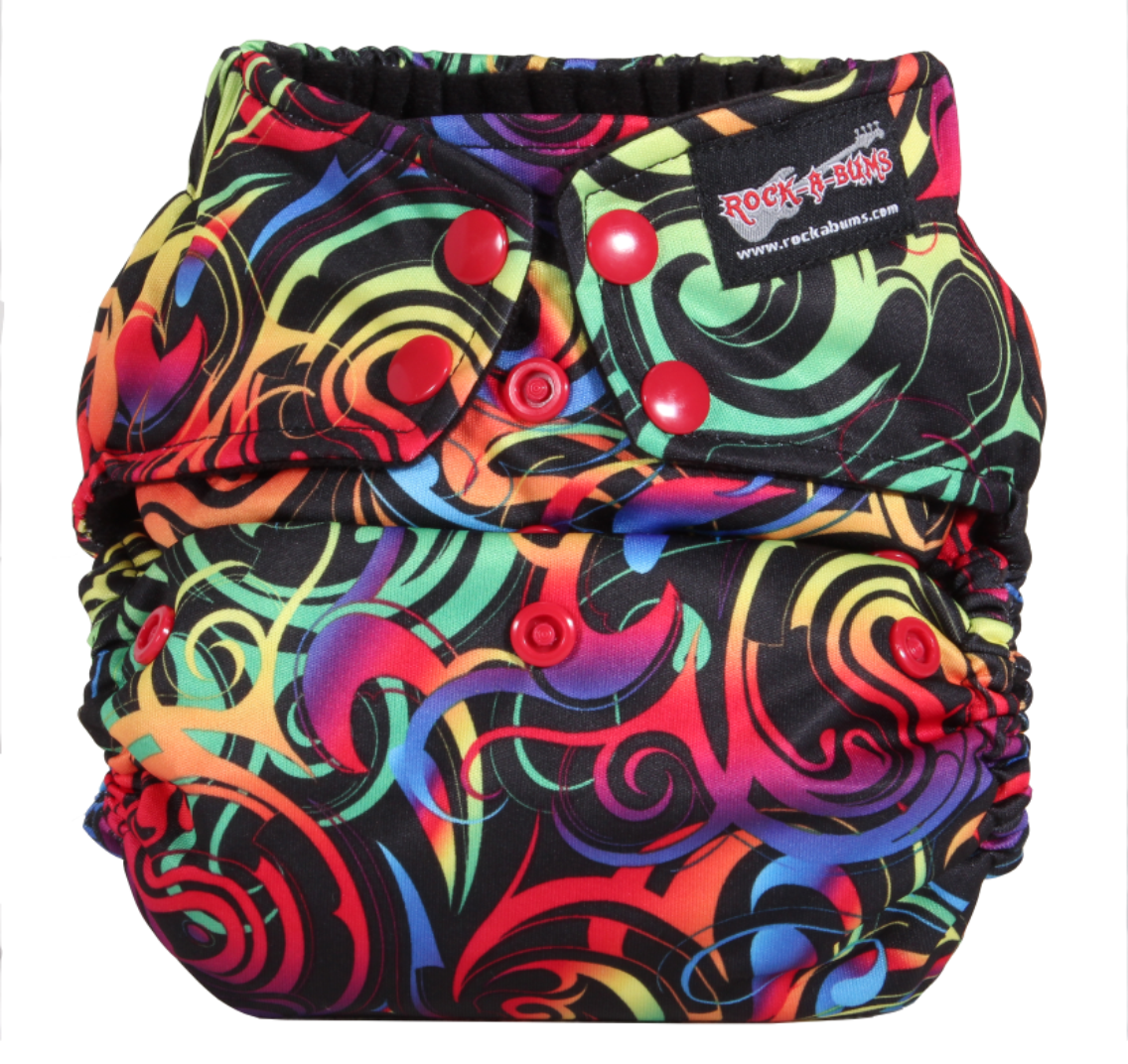 In addition to the solid colors, you can now choose between four new prints:  Blue Velvet, Punk Plaid Green, Punk Plaid Pink and Zanadu, and you can get all of these prints in either snap or velcro.
Are you ready for even more great news?  Now you can enter to win a “From Birth to Potty Learning” stash of 9 covers, 18 inserts and 60 hybrid inserts. Awesome, right?! Go Rock It Up!

One Response to “Rock It Up”