If you follow me (and I know you all do, right?), you know that I reviewed an Elizabeth Hunter book, Shifting Dreams, not too long ago.  You’ll also know that I’m a lot in love with her writing style.  So, when the opportunity came up to help out with the cover reveal for her third Irin Chronicles book, The Secret, I totally raised my hand in the air and jumped up and down squealing, “Me! Me! Pick me!” (Or, you know, clicked, “Comment” on Facebook…same difference, right?)  Here it is, in all its beauty! 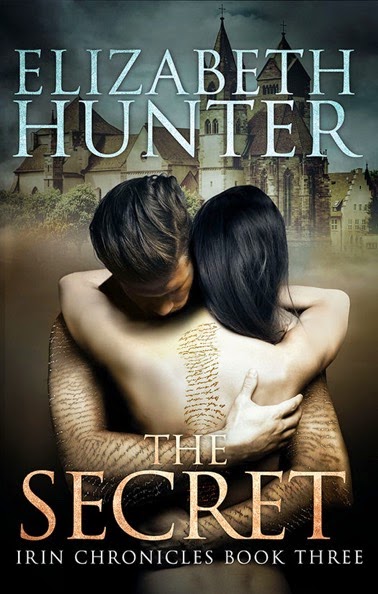 Only when the darkness falls can you see the light of the stars.

For thousands of years, the scribes and singers of the Irin race have existed to protect humanity and guard the gifts of the Forgiven. They have lived in the shadows. They have kept their secrets.

But the Irin aren’t the only race with secrets.

Ava and Malachi have found each other, but wounds as deep as theirs don’t heal overnight. While the Irin world struggles to correct the power imbalance left by the Rending of the Irina, Malachi and Ava struggle to connect their past with their present.

The Fallen may scheme, but Ava has found her power and refuses to be an angel’s pawn. And while Malachi may have forgotten his history, the scribe’s relentless search for answers leads both him and his mate to the heart of the Irin power structure in Vienna, where knowledge is guarded more closely than gold and those with power will do anything to keep it.

Malachi and Ava have survived the darkness, but will they ever discover its secrets? A powerful cabal of the Fallen may hold the answers, but to surrender them, it wants the Irin race to finally face their enemies. Both those coming from the outside, and those raging within.

Expected out on March 31st, The Secret is the conclusion of Ava and Malachi’s journey, begun in The Scribe and continued in The Singer.

Because I love you all so very much (ok, you really only have Elizabeth Hunter to thank for this), how about a teaser?

“What are you thinking?” she asked.
He was thinking about Volund’s unexpected ability to invade his unconscious, but he didn’t want to bring it up. Luckily, his mind could turn to pleasant things very quickly when he was with her.
“Do you really want to know?”
“Yes. I wouldn’t have asked if I didn’t.”
It was true. Ava wasn’t a woman who felt the need to fill the air with chatter. He wondered if years of traveling alone had trained it out of her, or if the constant voices that had once plagued her were company enough.
“I am thinking… you’re very beautiful.”
He loved the slight flush she gave him when he complimented her. It made the offer of his praise all the more satisfying.
“You’re the only one who’s ever said that,” she said.
He was surprised, but not overly. Humans could be very superficial, and Ava’s physical features were not the most astonishing thing about her. Pretty, but not uncommonly so. Clear skin. Dark hair. Her eyes were the most arresting part of her face, but only other Irin would recognize the unusual shade of gold as anything more than light brown or amber.
No, it wasn’t her physical features that were remarkable. And Malachi loved that only he saw the secret of his mate.
Her beauty lay in her mind and her heart. Quiet strength and resilient humor were not things valued enough by the world.
“Hmm.”
She gave him a quiet smile.
“You always did that,” she said. “Before. ‘Hmm.’ You’d be thinking something you didn’t want to say, but I knew it was about me when you would say, ‘Hmm.’”
“I often think about you.”
“That’s probably a good thing.”
They were sitting across from each other in the compartment. He put his foot on the edge of the bench beside her, enclosing them. Doing his best to block out the world. Ava set down her camera and slid a hand up his pant leg, her fingers playing along his skin.
“I think about you, too,” she said. “Some would say I’m obsessed.”
“And you take pictures of me when I sleep. I hear the clicking in my dreams. It’s borderline stalker behavior, really.”
“It’s settled then. We’re both certifiable.”

To make sure you can read this installment the minute it’s released, be sure to join Elizabeth Hunter’s New Release Mailing List.  There will also be an ARC giveaway both on the author’s Facebook page and at her website.